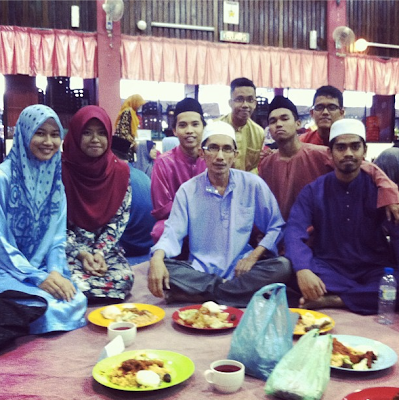 So many things had happened this week but I've just been too busy with staying up late because of MPP, my homework and to study. Rajin Asma is rajin. It's all because of Hannah, though... seriously. It's like she's always studying so I feel like studying too because if I don't, I'd feel guilty. And so, I study too. People here are all so smart that I feel dumb.

I have a few assignments and I'm stuck with Amar for most of my assignments. Death, come at me bro. He talks too much for his own good and he has a Kedah accent that he couldn't get rid off. He just texted me in his loghat. "We ahad ni dateline utk antaq tajuk and dpa kta sekali dgn buku log." And he said that I'm only in his group cos he feels sorry for me... Sigh.. loner memang macam ni.

While I was at the door on my phone (because it was bloody warm inside the class), Amir was there aswell.

It's mad at how close we got in such a short time that we (eh no, they) can mess about like that.

Yesterday, Acap came up to me before class.

I'll just keep on thinking that he's just jealous that I spend more time interacting with my phone than with him. And then Aiman came up to me.

And then I teringat Acap calling people outside of London, "kampung". ... ... ... He'll be living in the 'kampung' area soon. Syed then came up to me.


"Asma, where did you live while you were in the UK?"
"Manchester."
"United or City?"

The people who heard laughed their heads off. Syed's another funny guy. He's in my English class and he'd be the reason why everyone would laugh.

A few kids from FiST UK chat to me in English, wanting to practice their English. It's fun honestly but I sometimes feel offended when they're already half way through their sentence (in Malay) and then they suddenly restart their sentence in English. They make it as if I couldn't understand Malay.  Padahal my English is not even good. However, with the effort that they put in to improve and learn makes me respect them, why can't I be like them? And the fact that they're willing to help me out with stuff I don't understand makes me appreciate them.

Moving along... lulz. I had to read out the conclusion of Ayat 12-18 from Surah Luqman during Majlis Hari Guru and after I was done, this kid came up to me and Mar and asked me where I was from. Mar said that I was from the UK and that I couldn't speak Malay fluently. I got an A for BM though. And talking about BM, I want to go to Pn Sharifah's house during raya to beraya, if she'll let me in that is.

Yesterday was our Majlis Buka Puasa with mentor-mentee. And like everyday I didn't get rice. It was like everyone felt sorry for me so they all offered me their kuihs... even Cikgu. And then I told Cikgu that I was on a diet and then he was like oh okay, jangan makan. He then said that if I hardly makan, then my life in the UK would be easy. LOLOLOLOLO.

It may seem as if I'm having fun here. Honestly, I'm not. But I'm getting used to this place and the so so so so many smart people. As long as there is the internet, I'd be able to live. Another few months left... until I get to stay near home. I can do this.
KMKN me school