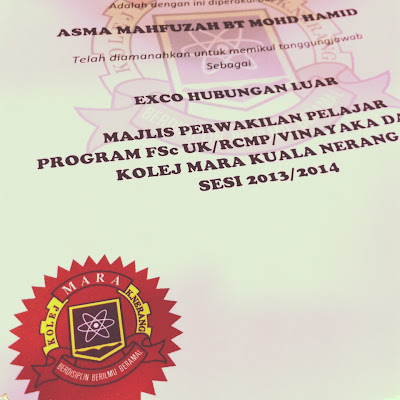 I cried... in front of people. It was embarrassing fullstop. There were a few people who didn't have a group yet including me. However, they wanted to put me in a group with someone that I prefer not to be in a group with. When I gave in, Mami called and with the emotions overload, I cried. It was pretty embarrassing.

A little bit after my little crying session, Sop and Aiman came up to me saying that they got me a different group. Bless them and thank Allah for that. Was glad that my group mates accepted me into the group. I wanted someone who was from Selangor before so it'd be easier for me and for us to meet up during sem break but two of my group mates are from Kedah. I really couldn't be bothered anymore. I was just glad that I wasn't grouped with people who couldn't stand me.

And I'm super glad that Amar, Zafran and Amir are my group mates. All of us have one goal and that is to get gold except for Amar... he wants platinum but he's a bit weird like that. While discussing, we chatted and chatted and idea after idea, the response was "Farid dah buat tu dah." Okay. Thank you Farid. But anyway, I like how all of us have the same objective and how our brains function the same way.

We played this one board game today during English. It was fun. So many of them were stressed out saying how it isn't fair and all. I want to play more games! I don't think I've been getting enough sleep. I can't wait for the weekends cos I'd be able to sleep all day.

About the interview with the Pengarah, it was nothing really. It was just for formality but like how can a Pengarah be so cool. She was all laid back. Everyone would honestly love a Pengarah or a Pengetua like her. I'm now the Exco Hubungan Luar in the MPP SPC URVFiB (July 13/14). Watikah Pelantikan went well, atleast I think it did.

Majlis Berbuka Puasa MPP's tonight. Food provided by the DS but cikgu got some currypuffs and ice cream. YEAYZ.