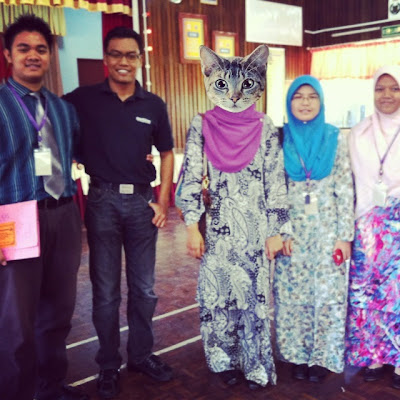 I hope I wouldn't end up title-ing my posts with KMKN # from now on. That'd just be plain retarded.

Went to see Ustaz in the morning for the translation thing. And as I was typing my script, he was saying how I can be a typist. -.-' Printed it out and got really nervous and all innit. Went to the hall, listened to what we have to do for our 15% project. Gotta find people from Selangor/KL since we'll be doing it during the sem break. Sem break. :( Also listened to our advisor talk, well I think she is...

Then came the moment... to go up on stage for the closing ceremony. Scawy okay. But I wasn't shaking. Went up on stage and had to sit on a raised platform. You know how girls would sit like nicely with their legs folded up in a weird way, I sat crosslegged like a boss. Got me feeling insecure. HAHAHA. I bet people were judging me. Wasn't that nervous at first, but the girl reciting the Quran was like shaking and so I started getting nervous.

When it was my turn, I read my script and at one point I couldn't see some of the words right cos it was too far... should've worn me glasses but oh well. Completed it without missing any words.. just a few letters. After that, Pn Shaariah gave a speech and commented on how the way I speak English can beat the Queen of England or something like that. Got everyone laughing. Malu jap. Saying that KMKN's English teachers wouldn't have a problem teaching my batch. And she believes that there are many people in my batch that are good enough to teach and that some can even teach the teachers. Urr... Urr...

There was this one faci who made a montage of our week here. Is that what it's called. And I just google checked it and it is. I'm so pro sometimes... at googling. Masalah. The guy could join the MedTech team if he wanted to. I have to let go of UTP. Hahaha.

Afterwards, it was time to bersurai. Was expecting something official from the facis but there weren't any. Was going all emo, "Diorang takkan ingat kitaorg pun nanti," and stuff like that. Wanted to take a picture with my groupmates and Farid but most of them went so the ones left did. Farid then told me that he gave my name to the debate teacher... dot dot dot... he told me to be the next Dell... but Dell is so terer I swear and I can't even debate that well but then he said that the teachers are gonna train us.

Anyway, we then left to the co-op (?) and then to the PPKK to ambil Adani and Aida's surat. Stayed there for a while... ada WI-FI.

And that was my orientation week. Better than UTP's but was expecting more group bonding. Oh well. Facis worked hard and I'm super grateful that they didn't go around marah-ing us, gave us enough rest and didn't give us a packed schedule. I hope to see them in the UK in two years.
KMKN me memories school