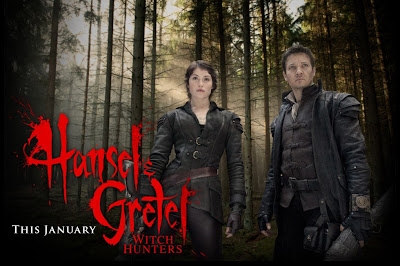 
That would sum it up. Went to the Hansel & Gretel : Witch Hunters Screening Premiere at TGV One Utama courtesy of HYPE and UIP. The twin seatings we got plainly made the whole experience better.

Hansel & Gretel is categorised as an action/horror movie. It's more of an action movie than it is of a horror one. Honestly, I don't even think it should be categorised as horror because a few cracked faces doesn't make things any scary. I'm not so much of a movie person so these are all based on my own inexperienced recall.

Hansel & Gretel were witch hunters because of their immunity to witch spells (SPOILER: They were half human & half witch). The movie went around basically about them hunting witches who were out kidnapping kids for their sabbath and for a spell that could make them invincible. Gretel was caught as her heart was needed. There was a troll, who helped Gretel out and his name was Edward... cue some chuckles!

Hansel went out to search for Gretel with a good witch who he fancied. In the end, the witch died for Hansel. Hansel, Gretel, Edward and H&G's fan went out to hunt witches and that was how it ended. The graphics were great, Hansel looked good, the ideas that spilled out of the movie were generally just great.

I think I've missed some good parts but as I said, I'm inexperienced.