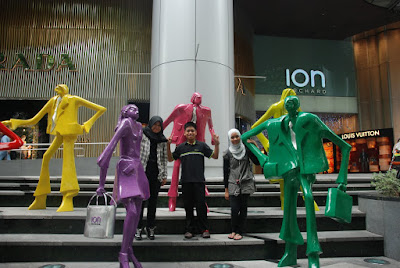 I miss my sister and my brother, like a tiny little bit. I haven't seen them since the last time they came back home. They're coming home next week. For a week. Kay nemind, I don't miss them nomore.

I like the pictures on this blog... cos of the border. It's so awkward. Using aku-kau instead of I-you. I went for a camping trip innit, met my former bestfriend, she uses aku-kau, I used to use aku-kau but then I got used to I-you. So yeah, it's weird. With the new kids pun sama. (NEW KIDS) lol. Maaf. It feels weird, that's it.

That was the last stanza. We should do more of them stuff.

I think I embarrassed myself today. Cos I said someone's name out loud (telling someone that he was there), he heard it and he looked. The only think I could do was smile and wave. So that's what I did. He waved back. I think I turned red.

Pengakap, belajar ikatan and kawad. I didn't cos I'm special like that yaawww. I couldn't stand those scouts who don't take stuff seriously. I mean, seriously, if you're a scout, you should act like one. And this one guy kept telling me that he doesn't want a patrol to be called a patrol but something else. Like excuse me, who the hell are you? Like seriously.