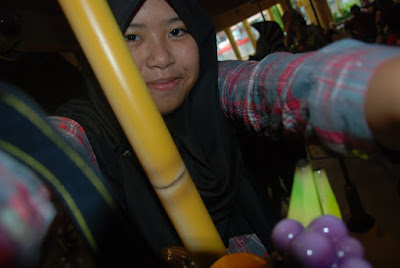 I got a new watch. I had to choose between an Adidas Cambridge, a Casio AW582SC and a black Casio G-306X. I ended up buying the black Casio G-306X and that's because my parents said that that was nicer and it wouldn't run out of 'style'. Plus, the guy at the shop said that I should buy that one aswell so I did, in the end. So yeah. New watch. ^^

Momma got an iPad. Papa bought her it. I didn't get to study except for an hour in the morning. So yeah. EXAMS next week. Takut.

I checked out a Condo in Bukit Antarabangsa, right next to my neighbourhood. The outside looked terrible. It looked worse than a flat. But when I went inside the lot it looked effing nice. So, ottoke. The swimming pool was nice, not really. the outside filter thingy weren't there nymore but other than that, it was pretty nice. I don't think I want it eventhough the inside was really nice. Like proper nice. As in really really nice. and the view was nice aswell. It was really nice, the insides I mean. Gonna check out Villaria next and a condo/apartment in ampang.

I like how I don't have to ask my parents first if I want to invite Hana for a sleepover. She's family now. :) I just have to ask them if we're going out anywhere or somin.