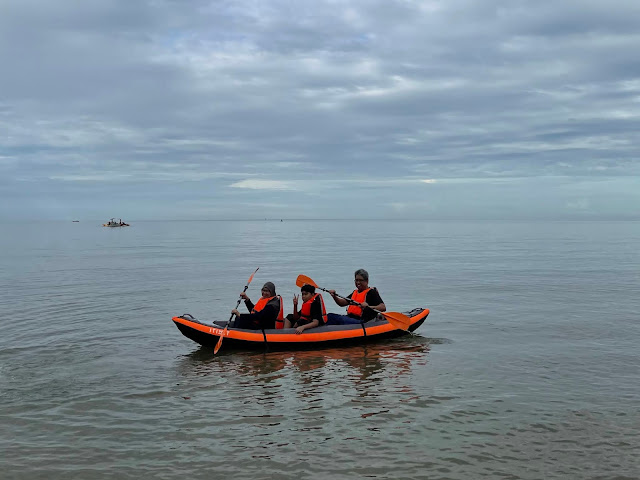 We knew it was coming but it was Monday last week when they had announced that Selangor will be in full lockdown for two weeks - and I was gutted. I had planned for Jared's birthday staycation and Kee Zhen's birthday day out. Fortunately enough, I hadn't booked anything for both.
We had gone for a trip to PD the previous weekend. Mainly because we wanted to go to the beach and kayak. It was meant to be a complete family trip but Aisyah and Syameem had decided to stay home last minute because they became close contact.
I've seen a pattern when it comes to weekend trips and it's the fact that I would only start packing in the morning because of work. So, it gets a bit hectic especially because we tend to leave right after Subuh and would end up with everyone waiting for me. Because I had stayed up the night before to finish up a thermal model for work, I was extremely hungry throughout the journey. Luckily, the two hour drive didn't feel too long and I had a good breakfast of nasi lemak. 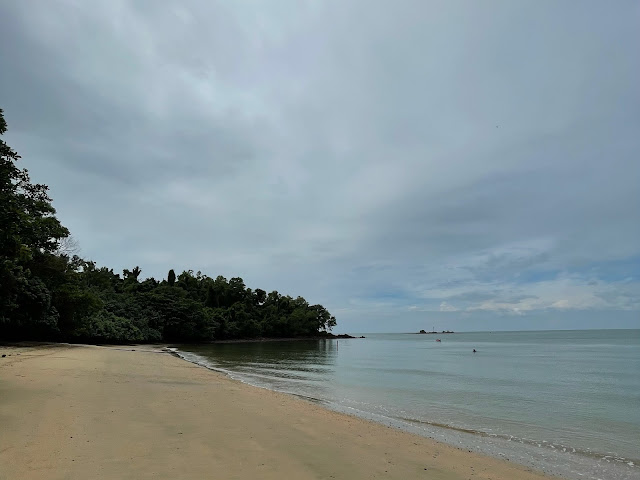 At PD, we have this secluded little spot that we would always go to and the area has been kept really clean but what had surprised us was how clear the water was. It's so much better than Kuantan's beaches. We inflated the kayak and went to a little island which seemed closer from the shore than it actually was once we've started kayaking. There was - what seemed to be - a little communication tower which I had really wanted to climb but then realised that the start of the ladder was hung above my reach.
The views from the island was amazing but I had forgotten to bring my phone with me so there aren't any photos. After a bit of exploring, we had decided to head back but I jumped out of the kayak half way in between because I missed being able to just... swim. Of course, that only lasted a few seconds because I didn't have the stamina! Getting back onto the kayak was equally as hard... Hakim called me a whale.
We had grilled chicken, sausages and things like that for lunch before we packed up. From memory, we've always gone to the 'secluded' beach in the Triton. So we had struggled to get out because of the steep incline and there was a massive hole in the road on the way up - the car we drove was a front wheel drive.  Hakim and I had to get out to assist in trying to get up the incline whilst avoiding the hole. After burning a lot of rubber, we managed. According to Dad, the only reason why it worked was because the car had less weight when we got out (rolls eyes).
I had wanted to stay somewhere nice and the only place that seemed half decent and had availability was Avillion Admiral Cove. We arrived at 3PM and still had to wait for our rooms to be ready which I didn't mind at first because the staff was very polite but after multiple disappointments, I've just had it. My room didn't feel very clean and so I complained - twice. It never got properly cleaned so I ended up cleaning what bothered me, myself. My safe was also already locked which I was upset about but since we had booked 3 rooms, I had my things locked up in Hakim's. Overall, whilst it was an OK place to stay overnight, it wasn't really what I had hoped for and I don't think I'd consider going again unless they improve.
Putting the hotel issue aside, I very much enjoyed the short trip. As you may all know already - I love holidays with nature and water. The fact that the beach was clean and the water was quite clear just made the whole trip better.
family holiday Malaysia memories