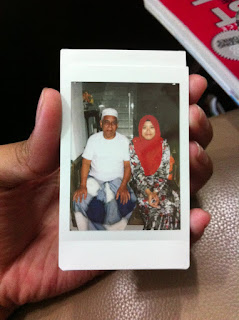 I was never really close to my Pak Tok growing up, that may be because I only spent a little part of my childhood with him. But I've always looked up to him, I admired him from afar. I never told anyone but I used to get jealous when I see my cousins have conversations with him and mess about with him because it's something that I wasn't capable of doing.

However, I did have random small chats with him sometimes but they were never really proper deep conversations... because of how uncomfortable I was at speaking in Malay. But I still remember them so that's nice. Bet you didn't know that I started wearing my scarf properly because of him. This one time, I drank too much and too fast, he said that my cup was leaking because my drink was gone too quick. He used to also playfully hit me for fun because I'm mengada and would overreact. Bet he wished that we were proper close too.

To make up for all the time that I didn't get to spend with my grandparents, I promised myself that I would save up enough money so that they could come to my graduation. But never did it cross my mind that Pak Tok wouldn't live long enough to see me graduate. Never did it cross my mind that he would be gone this early. I never really got to tell him that I love him, neither did I get to thank him for raising my dad so well or thank him for accepting my mum. On the days that I thought of him and my grandma, I never called. But I did get a hug from him before I left to come here and I'm honestly contented with that.

Papa, Mami, Mak Tok, aunties, uncles, siblings and cousins, stay strong. Being back in Muar is going to feel so empty without him but we can't do anything about that except doa a lot. Pak Tok won't be there waiting for us to arrive anymore, he won't be there to wave us goodbye as we drive off home either. Someone has to take his role as an Imam now. We won't be able to hear his mega long doa after we pray. What are we going to do? How are we going to get through the days we spend at kampung?