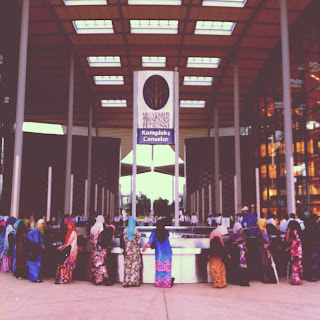 I walked into the Chancellor Hall and suddenly, my phone rang. Rock Ur Body. Can you imagine how panicked I was. I didn't know where the heck my phone was and I was just very serabut. Registered with Puteri and we ended up being roommates. Which was good. The new room was cool, with a separator in the middle so Puteri wouldn't need to see my annoying face 24/7. Lucky her. 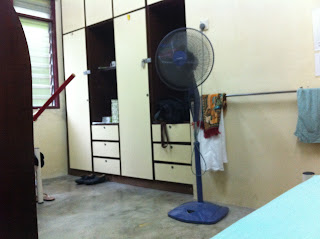 Orientation was tiring. We had to pray Maghrib and Isyak at the mosque. And Subuh in the surau. Not complaining. However, every single day the activities ended after 12. And we had to walk all the way from our room to wherever our activity was held and back. Bless the facilitators though, it was raining pretty heavily on one of the days and they provided us a bus. 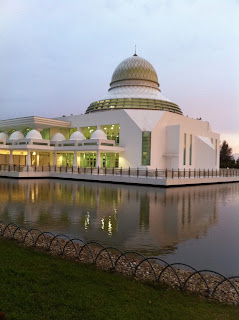 Became friends with some cool people. Husna, Ely, Puteri and Qis who we met later. Husna started hanging out with us when she asked Puteri if they could walk back together. And later on I met Husna and you know, when you have the same intention then you'll be able to get along together. Hur hur. Met Ely later because she came in the next day. Met her in the mosque. Then there's Qis who is Ely's classmate but we got close because of SRN. And basically, all of us were able to get along together and I spent my 12 days in UTP with them. 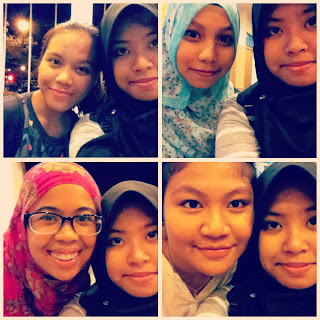 We were basically the front row kids because that's where we sat every single time we were in the hall. But sitting on the front row never stopped us from sleeping. I remember this one time, I can't remember what was going on but there were cameras out and we had to wake each other up every time it comes in front of us. 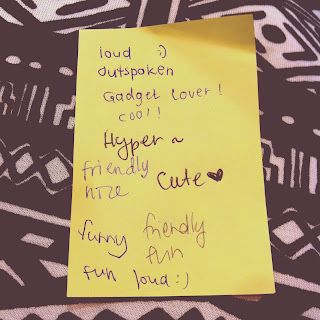 On our first day or second, I couldn't remember, we had this ice breaking session so people had to write what they thought about other people on this post it note that everyone stuck on their back. We played so many games and generally, it was fun. We did the Dunga and some others... that I couldn't remember. There was this one time, we were woken up in the middle of the night because there was a fire drill. Pretty annoying. I'm just randomly typing what I can remember to be honest. 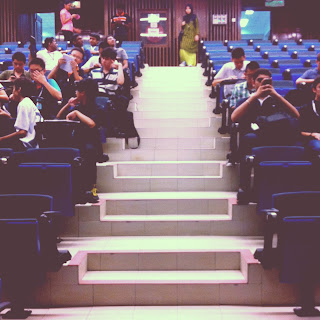 After my first Islamic Studies class, I walked all the way from my room to Ustazah's room. It was a nice walk. Not really. I don't really know why I went, I just wanted to see her for fun. People said that she's scary but she looked pretty cool to me. People wanted to elect me as an assistant project manager or something for a class project so when I told her I was leaving, she made a face. Joah. Haha. 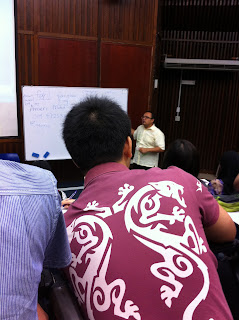 Thinking skills was just well fun. In the first class, the lecturer came in and started speaking British English and I was like oookkkaaaaayyyy. And then he handed out this one survey for us to fill in and there was a question that confused me so I asked him and then instead of thinking skills, we had a 'how to pronounce english words properly' class. All because of me... Yeah... all because of me. But everyone had fun repeating what Ameri said. So, you're welcome. In my second and last Thinking Skills class, Ameri asked what my name was and Jay's name and Rubin's name and this one other guy's name because we were the only one who actually participate and I told him that I was leaving and he was like "Aww." He then called me after class to ask what my plans are and all. :')

My lecturers were fun and the lectures were fun. But all the assignments scared the shit out of me. There were soo soo soo soo many, I couldn't even count. Well technically, I can but you know. I freed my Friday so I had nothing on Friday but then I was packed with class on Monday. But then I had Modern Music on Saturday. Smart.

Oh so every single day, after the first week, we had to get our own food so we'd walk around campus to get food. Went to V5 once and was awed by the Village. It looked like a hotel not a hostel and it had a really nice cafe with western food. Oh and at Pocket D, there's a Western Food shop so it's cool. Had lunch there a few times. 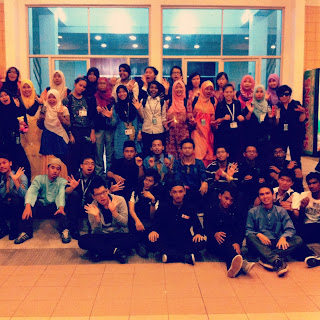 Me and my mates joined the SRN team for props. Kak Sarene and Abg Ayol were our facilitators and they were cool. We were able to go back stage and you know, just check out what it's like to work with the MedTechs... and it was scary. Haha. Talking about MedTech, I'd totally join them if I stayed. They're like the coolest bunch of people in UTP. Mad talented and well, just cool. They had this presentation up to introduce themselves and the introduction to their introduction was just so cool. This one time, they had the speakers going and then they played with the lights. Too. Cool. 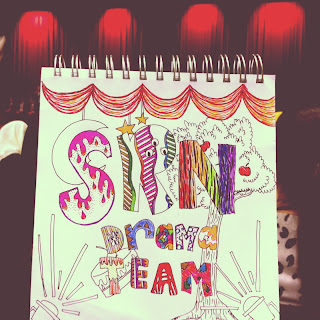 There were days when we were shouted at by the discipline team. As if I cared. *flips hair* They were mad, getting mad at us for no valid reason. Like shouting at the kids who came about the kids who didn't. And shouting at the people who were late at the ones who weren't. That's typical though. The guy who's always shouting had this weird accent when he spoke so that was amusing. I think he's from somewhere up north or something. But they don't really speak English even though everything was supposed to be in English. 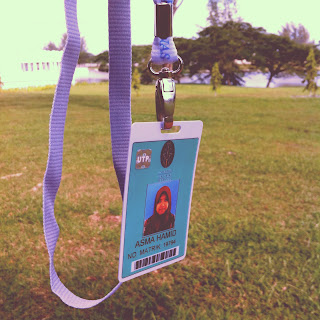 On my last non-public-holiday day there, I went to get some souvenirs for myself... so I could show off later in KMKN. Hahaha. I wanted to get a UTP jacket but I was wondering how they would post it to me. I'm thinking of getting one now... right now but I think they've closed the preorders so oh well. Too bad. Husna told me not to waste my money. HAHAHA.

And I had to walk to the mosque by myself on one of the nights but then there were a few girls so I caught up with them so that I wouldn't have to walk there alone. They asked me if I was a mix. Sure I am. I honestly felt really comfortable around Husna and Ely and Puteri because all of us spoke in English. Plus, when Husna, Ely and I speak in Malay, we would sound weird so we had something in common. Talking about them reminded me of this one restaurant in there that has the nicest naan ever. Mayyynnnn now I'm hungry.

Ely, Puteri, Husna, Qis, Kak Ani, Kak Shira, I hope I'd get to meet people like them in KMKN and UniKL. Life would be fun that way. And within the 12 days I was there, me mates didn't really text me except for this one person. And I'm thankful. So thank you.
experience friends me people Petronas study UTP