By Asma Hamid November 12, 2017
The thought of having to meet someone new or someone I'm not close to scares me. I normally wouldn't just go up to someone (who aren't my friends) and talk to them but when I do have to, so many things will go around in my head. I would plan out the conversation, the way I approach them, how I would say hi, what I would do with my hands, whether I would stand or sit, how casual or formal I should be. It scares me. It usually takes me ages to just gather up the courage to talk to them.

It's the same through email too. I take so long to write emails because I just need it to be perfect. I would write, rewrite, get people to check it for me, get people to improve it for me, get people to proofread it for me and all just to confirm a meeting. But bit by bit, I'm improving. Since I started working, I've had to write quite a few emails and I don't take as long as I used to. I still use my mentor cum best friend when I'm unsure but I get less nervous before sending out emails these days.

This leads to a story of last week when I decided to email an academic staff without thinking through.  I wrote the email, read it through once and on the spur of the moment, sent it. I freaked out. Not only did I email her without thinking twice, I also initiated to meet up. But you know what, it wasn't so bad. I met up with her, we discussed about the entrepreneurial culture in the university, she referred me to someone and immediately after that, I emailed my manager/supervisor to set up another meeting.

I'm guessing that things get exaggerated in your head when you're nervous and think too long about it. So, if you have an unsent email in your inbox that you're too scared to send to someone because you're asking them a question or asking them for help, read it through once and just press the send button. If they don't answer your email, then it's not like you haven't tried.

However, when it comes to meeting people... I still take ages to convince myself to just go and talk. But try convincing yourself nothing bad is going to happen. The other day, I approached someone in the co-working space (took me days, though) because I see her all the time. I didn't die and I gained a new acquaintance that I now say Hi to every time I go in for work. 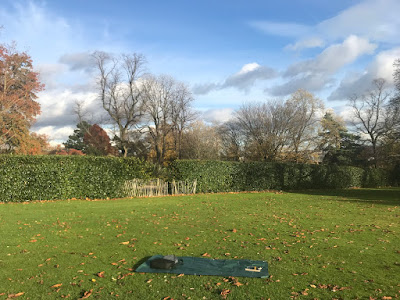 Because it's the weekend and I'm tired of the Diamond, I told myself that I have to go to the park while the sun is still out and before it starts getting cold. So I did. I spread my mat out at the Botanical Garden and sat on it - the coolness from the grass went through but because the sun was out, it wasn't too bad. I managed to finish another chapter of a book I just bought from Amazon - Secrets of the Tomb: Skull & Bones, the Ivy League and the Hidden Paths of Power. Unfortunately, an hour later, the clouds started gathering up in front of the sun so I had to leave. However, I felt so much better after getting some fresh air. I felt more alive, I felt revived. I hope there won't be a day when I can't go out to the park or the woods when I need it.

nqdmwbf005 said…
Cafe Casino provides a moderately beneficiant welcome bonus for crypto and fiat bettors alike. 온라인카지노 Once once more, iOS players are relegated to inserting their wagers by way of Royal Panda’s mobile-optimized web site. If you're be} just getting began, there is a nice welcome provide waiting for you at Jackpot City.
January 27, 2023 at 4:07 AM