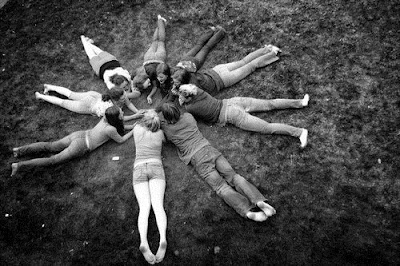 Michelle, she came this year. She moved here from Kedah. I didn't like her at first, I didn't know her and I didn't like her. And that was because everyone started talking about her. Being in 5ST1, all I heard about her was from the mouth of others... it was all "She's more pro than you Asma." "Her chemistry's better than you." and all of that. How can I like her when the way people described her was by comparing her to me.. if you know what I mean. But then, she started going to our tuition AND I SWEAR, SHE'S LIKE THE (INSERT EVERYTHING NICE) GIRL EVER. She was a sweetheart. She's well nice, friendly and she just fit perfectly. I really can't imagine the whole group without her in it anymore. It would've been better if she was with us in 4ST2 and the years before that, we could've had waaaaaaay more fun. Plus, she keeps the guys controlled (random slaps and all). She was like the missing piece that we didn't know about before this.

Keeve, he's a bytche. He swears too much. He bitches around too much. He gets mad at people when they're racist to him unless those people are his friends. But Keeve, when we're stuck or anything, he'd be the one who would tell us what we should do. He'd be there for you if you're bored and lonely... probably cos he's a loner himself, I'M KIDDING! Me and Keeve, we would chat and mess about during the break time (while jaga-ing the blocks) and this one time, Keeve or was it me, had to like move floors so we would jaga properly. (tongue out to whoever suruh to do that)

People keep thinking that me and Dzaf are tight. We're really not. I hardly talk to him. Hobos probably know him better than I do. I seriously have nothing to write about Dzaf, I'll come back to this when I think of something. (I've thought of something) Dzaf, he'll come and chat to you at the time when you're not expecting anyone. He pops out randomly and you'd be surprised. I am actually surprised with myself because I've never fancied him cos honestly, he's good looking and he's alright, I guess? And when Dzaf speaks, he has this really weird accent that's annoying but at the same time really funny. But I don't like it when he gets annoyed or pissed off cos I'll go all wary. It's not scary or anything but you know, I don't want him going home, telltale-ing to his mum and sister. And when he's annoyed he has this tone while talking that tells me to stay away. I don't think Dzaf talks much when everyone's together, I'm not sure.
And in case anyone goes back to this post just to read it, me and Dzaf, we're tight now.

Derek shows off too much. Derek also likes to annoy people. Back in Form 2, me and Derek used to kacau Sahera. I feel guilty because of that, he doesn't. I guess he doesn't have feelings too? Derek can be so random at times, he can come to you and he'll tell you that he doesn't want to talk to you but then he'll start the conversation. Logic, where is it? I actually have friends who thought that I fancied him because I talk about him so much but it's actually because he keeps annoying me, up to the part that I can't stand him anymore. But without Derek, a school day wouldn't have been complete. There were times when I'd be looking around the class searching for him when I felt as if everything was so quiet and then to realise that he didn't come, then I'd be upset a bit. We're not close, me and Derek but I know that school would've been waaaaaaay boring without his randomness.

Kee Zhen is just really quiet but he's also really nice and quiet. (looks around) Yeah. Nice and quiet... *nods* What have I got to say about Kee Zhen? Kee Zhen's cute? I don't fancy him or anything don't get me wrong.. but he is kind of cute? I mean to me? I just hope that it wouldn't be awkward to talk to him after this. I don't think I talk to Kee Zhen much, just that he's always around and he's always there if you want to ask him some random questions.

Lim said that he didn't like me when he first met me... I didn't even know who he was. *flips hair* I've never liked muscles.. but this one time I told him that it actually looks good and then he was flexing IDK purposely or not in front of me. And that just made everything awkward for me, so yeah. Lim, when we were in 5ST1, I thought that you know, the ST2s would stick together but then he started hanging out with the previous ST1s more than he did with me. Which got me upset. But then as it got nearer to SPM, he would sit in front on me while studying. But I was upset at first okay. And this kid, he has so many things going on in his head that I can't even keep up with.

Me, Nick and Jaja used to sit in the same row back in 4ST2, he talks a lot but he couldn't stand it when we talk a lot. I don't get him. Sometimes me and nick would make fun of Jaja and we'd have each other's back when we're against Syaza. It's not considered as bullying if she doesn't mind... right? When Jaja got Nick a birthday present, we were all calling him Calculator Boy. REMEMBER? No? Then that's too bad. (dissapointed face)

Am I missing anyone else? This group of people, I'd miss them when I get into college or university. I'm not sure if we're still gonna be 'close' and if we'll hang out with each other anymore later on but these people made school cool. They're so fun to be with and if we all went to the same college it'd be the coolest thing ever but we won't. Which is saddening.

Mich will be going to Brickfields while pursuing her dream of becoming a singer. Keeve will go to Sunway to do business. I'm not sure about the rest but I really hope that all of us will become successful so we can go on a holiday at some 5 star island staying in a 5 star hotel before we all get married and just bring back all the memories of talking about random things, annoying each other, annoying other people around us, playing truth or dare and everything else we did or going to do during the holidays.