Bulgaria Trip During the State of Emergency! 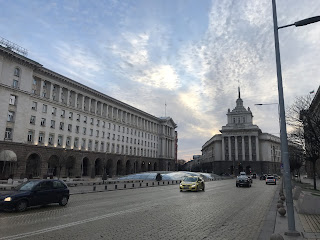 If you follow me on Twitter or Instagram (and can see my instastories), you’d probably know that I’m currently in Bulgaria. But I’m not just in Bulgaria, I’m in Bulgaria while it’s at a state of emergency due to the virus Bulgaria. Funny enough, the reason why I was okay with Bulgaria was because at the time I planned the trip, there were zero cases and I thought, not a lot of people visit Bulgaria so I wasn’t expecting anything to happen. I guess I took that for granted and didn’t check right before I left because today is the first day of the emergency! Bare in mind - Bulgaria only has 0.4% cases in comparison to the UK.

I arrived into the airport at 3AM this morning with the intention of waiting at the airport until the first public transport but hey hey hey, the airport closes after our flight lands. Therefore, I didn’t have a choice but to find my way into the centre which is pretty straight forward tbf. I took a taxi and told the driver that I’d like to go to a 24/7 McDonalds but on the way there, we were talking and he asked me where I was going etc. Then suggested that I should go to the central bus station because it’s definitely open 24/7 and he doesn’t want to send me somewhere that may be closed. Agreeing and grateful that he was nice enough to have told me that, I spent the rest of the night at the bus station, talking to a bulgarian guy about Malaysia, life, career and... the corona virus. He gave me some strength and said I shouldn’t worry too much about my career because it seems like I have my life set. I then left for a comfier seat and spent the rest of the night watching the Formula 1 netflix series (it’s so good).

At some point in the morning, I realised that I wanted to have a bit of fresh air and decided to head to Starbucks that opens at 7AM while waiting for another cafe that was supposed to open at 10AM to fill my time before my 11AM walking tour. I bought my bus ticket to Bansko for 4PM, stored my luggage and headed out to the Starbucks in the middle of town. I used the Metro which looked as if it came out from a movie and took time to appreciate it. 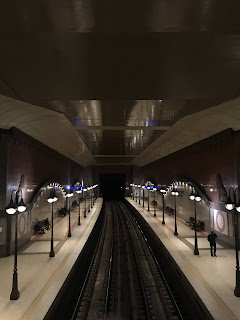 As soon as I got to Starbucks I realised that it was still closed and it didn’t seem like it would open and I thought - what’s going on here. I walked around the place and saw a sign in front of a restaurant that said something about a national emergency and decided to search it up. That was when I realised... (the person sitting behind me is coughing, should I run off?). That was when I realised, the Bulgarian government decided that today would be the first day of that and all schools would be closed and people aren’t allowed out unless to go grocery shopping. 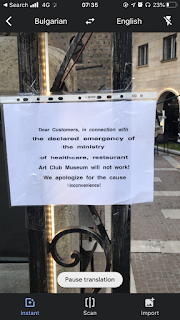 And so, I was stuck. But you know what, I went around to see a few things anyway just because they were all nearby. At the same time, I still had some hope so I headed to the cafe I wanted to go to. Luckily, the shop owner arrived as I was heading off and told me that they won’t be opening today. That had rested some uncertainties within me. I then decided that right, since I can’t go anywhere in Sofia, I might as well head straight to Bansko. (She’s coughing again, should I really run off?)

So I took the tram this time and went to the central train station because it looks newer than the bus station for the toilet. Reading reviews about the toilets, I had kept my expectations very low but was met with a very clean toilet. A lesson to everyone, don’t base your life on reviews, experience it and make your own judgement. Eceh.

I then headed to the bus station - with a lot of worry, mind you, and asked to change my ticket and/or to get a new one and lady said two words - no bus. NO BUS? WHAT DO YOU MEAN BY NO BUS? YOU CANT JUST CANCEL 3 BUSES STRAIGHT LIKE THAT. NO BUS? Of course I was confused, I was again... stuck. She had said the earliest bus would be at 2 and it wasn’t a decision I could make, to buy it or not? So I called the first person that I knew would pick up my call and could help me with my thought process - Kak Aisyah. She told me to save my money and just wait. 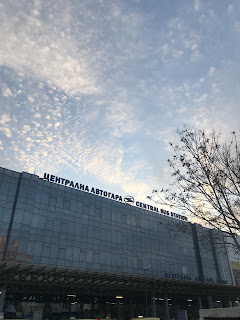 And so I waited. While waiting, an announcement came up so I asked a bulgarian lady what it meant and she translated it for me and then asked what announcement I was looking for - bless her! In return, I minded her bag while she went for the toilet. And so I continued waiting.... and got restless so I went to platform of the cancelled bus - not because I didn’t trust them but because as Graham L. had once said - you can’t trust everything you see. Heh? Did I just contradict myself?
Some random lady just came and approached me but then walked away... contemplating whether to continue or not... after I responded... she ok? Maybe she’s nervous? Maybe she doesn’t speak the same language? I digress.

I bought coffee and still waited and then realised, why am I spending so much time waiting and overthinking! I have a Plan B which is to take a shuttle to Bansko and a Plan C which is to stay in Sofia. So I realised the only way to stop it is by being productive - which is why, everybody, I now have a whole blogpost!

It just turned 12.30, I have 1.5 hours left until the bus would arrive. Worried that tickets my sell out, I went to the counter and said please may I buy the 2PM ticket to Bansko? But she wasn’t really concentrating on me because there was a lady next to me that was frustrated with the language barrier. But then I continued, “but I have my 4.45PM ticket and I’d really like the 2PM”. So indicated with her hand, “lemme have it, dah-ling.” I gave her my ticket and she swapped it for the 2PM one. I was tempted to say I LOVE YOU, THANK YOU FOR MAKING ME FEEL BETTER but I thought it wasn’t appropriate as she was still really focused on the frustrated lady next to me.

And that’s what happened in the first half of my day in Bulgaria. Also did I tell you that Trevor Noah’s Tour been postponed? I am quite sad but it’s ok.

Until the next time I find mysef overthinking and needing to do something productive.