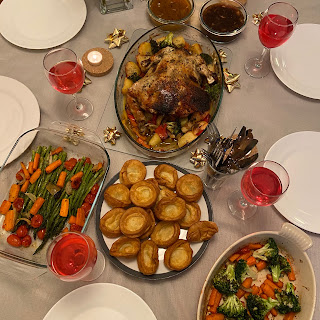 Christmas holiday planning went from Scotland to Wales to Paris to just Thorpe Park but ended up with spending time together in Maidenhead. As a summary, we spent 3 full days together talking, cooking, eating, playing games, dancing, eating, eating and more eating. You can see where I'm going with this.

I would've thought that my holiday would be boring if someone had told me that all we're going to do is stay at home but it was such an amazing holiday; I'm actually having withdrawals from it. So here I am, writing about what we did and how we celebrated our days off while I wait for a potential housemate to come over to view the house.

Right, so I got distracted because someone came over, three weeks later, here I am trying to pick up where I left off. We had Zariq and Yen over throughout Christmas and Roaa and Adham came for Christmas dinner. With a lot more hands to cook and knowing what to eat just made everything so nice.

My holiday started after lunch on Tuesday and when I got home, I cleaned up the house a bit while waiting for Syahiirah and Zariq to come back with groceries. On our list, our first meal together would be bangers and mash for Christmas Eve dinner because we wanted to really immerse in the culture - food included. But because we were still missing some ingredients, we waited for Yen to arrive before heading out. Her journey was horrendous because of all the train disruptions. I mean it's fairly easy to get to Maidenhead but apparently, not on the day when everyone would be travelling. That aside, we went out to town, got McDonalds but also more food, some decorations and drinks. Yen and I got ourselves a santa hat to feel a little bit more festive. 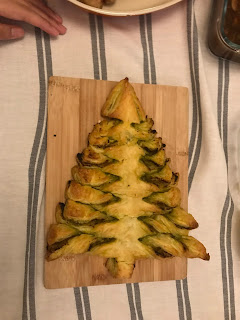 Because it was bangers and mash, we hardly had to do anything so that was pretty ideal. I also made pesto pastry shaped as a christmas tree because I had it in Vienna when we were at Gerda's. We also made cinnamon buns which was fun - for me at least because I didn't have to touch the dough at all! Syahiirah and Yen were involved in the messy part and I was quite happy about that because I hate that part about making anything bread! 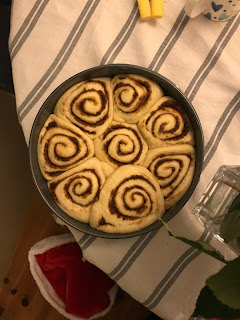 But our Christmas eve dinner was a quality one! I believe we may have had jazz playing in the background. You might not know but Syahiirah, Zariq and Yen are all Aisyah's friends so I can't say that I knew them. But that night, we got to know each other - with Yen leading the conversations and getting us into thought provoking discussions on our emotions and personality. We went through 50 questions to fall in love or something similar to that. There was so much bonding that night, I extremely appreciated it. It was such a great start to the holidays.


On Christmas day itself, I woke up early so I had time to plant succulents for Laura W., Hannah and Holly. I didn't realise how hard planting is but I think some people are just born with it and I'm not. That aside, I really enjoyed making them and they turned out pretty which was my main goal. When everyone woke up, we had breakfast which were 'leftovers' from the night before. So as you may have probably already guessed, we had eggs and sausages and cinnamon buns. The rest of the day was spent preparing the Christmas dinner with festive songs playing throughout the day. We watched movies and played monopoly deal (my favourite game). But really, aside from the cooking we basically just lazed around. 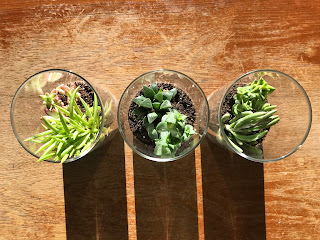 Closer to dinner time, Roaa and Adham came by and I just loved the entire vibe. Roaa brought gifts which was the sweetest! But also, she brought soup. And I'm not a soup person but Roaa makes the best soups fullstop. So I had a lot of that too, despite me being quite full. We then played games before they headed home. But that was not the end of our night. I was quite glad and hoped that there was no one next door at the time because we laughed and were just loud in general. We had some songs on, we danced, we sang out loud, I basically had the time of my life. We played charades and I can't remember what else but we probably seemed drunk if anyone was looking in. 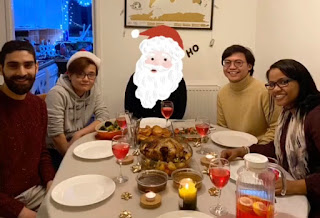 Boxing day was spent deciding whether to shop or not but we did a lot of sitting around shopping online but I didn't get anything. Again, breakfast was the leftovers so I had some extra pastry which I topped with pesto, chicken, tomatoes and cheese which turned out lovely. And if I must be totally honest, I can't actually remember what we had for lunch but we were sort of tired of the food we were eating. And thought, you know what, we sort of miss home and we just had to make nasi lemak. And so nasi lemak we made! It tasted amazing. They made roasted chicken that tasted fried but wasn't and it just blew my mind because sedap gilz nak mampz. I think at this point of the holiday we were calmer, less excited and was just relaxing because WE'RE OLD. 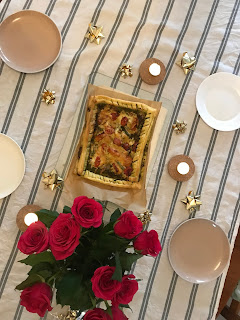 The day that I dreaded the most then arrived. It was time for people to leave - not because I halau but because people miss their homes and I totally understand that. Yen decided to go home but Zariq wanted to stay over for another night so rather than do nothing, there was one thing on my holiday list that hadn't been crossed out yet which was going on a walk. So that we did. We got an uber to Marlow, walked by the river and then just went around town to do some shopping and other things. We had dinner at the Botanist, my main meal was disgusting. Had like half of it and just couldn't eat anymore. But they do serve amazing chips so I'd go there for drinks and snacks but wouldn't go again for a proper meal. We then had to have dessert and had the most amazing carrot cheese cake at Baroosh. Headed home afterwards to watch a movie and ordered fast food because of that disappointing meal. My cheeseburger that night was amazing. 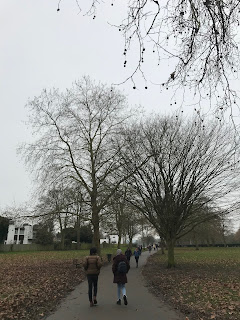 And following that, Zariq went home and then the rest of the holiday was just like any other day just that I was on house arrest because I had an assignment due. It was such a waste of time. I should've just gone out because I didn't actually start my assignment until a few days before it was due. I never learn, do I?