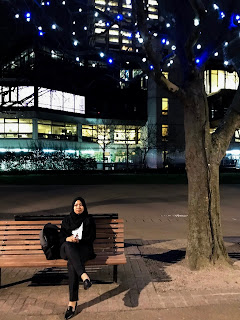 The Malaysian Career Fair started a week earlier from my university’s Easter break. This meant that I had to skip classes, miss out on work and rearrange my meeting with my supervisor. It was worth it. I went not expecting anything but I left learning so much from the whole experience and from talking to talent acquisition specialists, recruiters and employees.

I won’t give you employability tips, tell you how your CV should be or teach you how to network but I’ll tell you what I’ve learnt. I have had a few companies that approached me before the career fair itself to screen me and invite me for interviews.

With one of them, I had a phone interview, video interview and a psychometric test that I had to do before the final face-to-face interview where I was offered a position. Throughout the whole process, I felt so welcomed to the company and I wasn’t even in it yet! It was for a position that is not within my field but I was considering it because it has always been something I wanted to do. Which was why I decided to go through with it from the start.

This company tried their best to ensure that both my phone and video interviews were set to be at a time that was reasonable for me. Which I personally felt was such a nice touch just because I have told them that I wouldn’t mind waking up early. When I met the team in London, the person interviewing me talked to me as if she really wanted to get to know me. She wasn’t even in HR! I enjoyed the experience so much because it really felt like a two-way communication. After that, she sent me in to talk to someone from HR who told me what it would be like to work for the company. And as if that wasn’t enough, they invited all of us for a cocktail session to get to know more about the company and the programme.

In it all, they went through that extra effort to show all of us how much they want us to join the team that it just made me feel very appreciated. One of the things that I’ve learnt is that make sure that the company treats you like they want you as much as you want them. It’s not a one-way process. When you do your research, don’t just research on how to get that job but also research on whether the company is the right one for you. In the end, though we should not feel as if we’re entitled to be treated that way, it is really important to understand that you, the one who’s applying for the job, will be bringing money to the company once you join. They say beggars can’t be choosers but have value, work for a company that you actually want to work for.