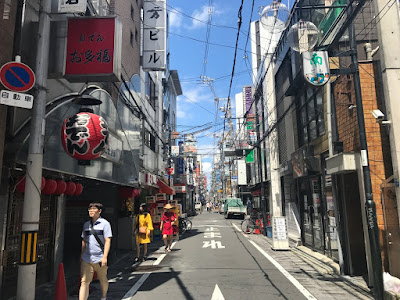 Going back to Malaysia was a choice I made based on the reason that the whole family was planning on a trip abroad and I did not want to miss something that big because of my own selfish reasons (of wanting to experience the summer in the UK). But I also didn't want to go back just because of one week. So I decided to extend a week of the trip to nearly a month to really experience the country. Since I went to Slovenia, I had realised how much I enjoy trips that aren't overfilled with activities and places to go. From then on, my trips to Poland, Paris and now, Japan are exactly like that.

Our trip was of a week in Osaka, a week in Kyoto and a week in Tokyo. I'm two weeks into this trip and in all honesty, I enjoyed Kyoto so much more than Osaka just because I've discovered that I'm not into that city life. I'll share what I liked and disliked about Osaka then I'll get on with the itinerary and how much my brother and I spent.

Osaka, was basically, just that. The city, a lot of lights, a lot of shopping places and a lot of people. It was unfortunate that the temperature was and is currently extremely high as it made it a bit difficult to appreciate walking around. We were always searching for shade and praying that the sun would be covered up by the clouds. The only time I managed to enjoy myself was when we went out at night - mainly because the sun wasn't up.

We stayed at the same Airbnb throughout the week and I was deeply disappointed by the flat we got. It was on the fourth floor, there wasn't any washing machine though it was said to have one and it was incredibly tiny. But I lived. However, I didn't really find it that bad until we went to Kyoto.

Every day, we would leave the house around 10-12 or later thanks to my brother who seems to enjoy sleeping and would only wake up when I wake him up. Having a week in Osaka didn't seem too long at first but towards the end, I guess we started getting bored of the place. There wasn't much to visit and I don't think I'd like to go back to Osaka unless on a business trip.

What I've realised about Japan is that everything seems to be very expensive. Initially, we thought that as long as we don't eat out, we'd be fine but every visit to market would cost around 1500 yen (RM60 | £11) and that's just buying the basics such as bread and drinks (non-alcoholic!) for two people that would last a day or two.

This seems to all be very negative but I do appreciate some of my time in Osaka. The lights at night are amazing! It's also pretty close to Nara which was more of the countryside but very pretty! Plus, we ventured out a bit to the outer part of the city and it was nice seeing less of the hustle and bustle. Everything was also a walk away from where we stayed so overall, it was a nice city experience.

h3lr13l96m said…
Despite the higher house edge that they had 온라인카지노 to take care of, Americans loved roulette quite a lot. However, they ultimately misplaced interest in it and began half in} video games that you could actually beat – like blackjack, for instance. Roulette was launched to the US by European settlers who landed in Louisiana in the early nineteenth century. However, things didn't go as easily as they did in Europe. Casino proprietors weren't pleased with the 5.26% house edge and determined that they wish to enhance it.
January 21, 2023 at 1:02 AM