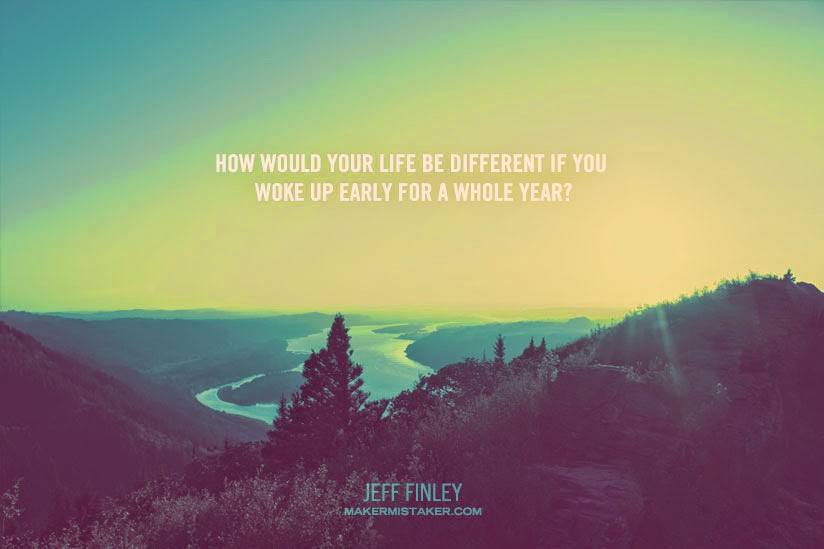 For a self-help book that has yet to be launched by Jeff Finley titled Wake Up, click here.

It's day 1 of the 21 days of waking up early challenge. I should make a shorter label for this. The Early Challenge it is. 21 days only because I want to believe the "21 Days" myth - a myth for a reason. Lets just say that the 21 days is to just so that I have something going on because expecting me to just suddenly start waking up early is close to impossible. But maybe, I might do it until it becomes a proper habit which would need me to continue for 1-2 more months.

And why, really why do I want to do this, you would ask. Many successful people become successful because they wake up early; I too, would like to be successful. It's as simple as that. I do not know when exactly will my career start, it might be while I'm doing my degree and because it's never too early to start, I might as well. And I'd like to sneak in some exercising before class but I'm not quite sure whether I will even manage to do that. But right now, lets take one step at a time.

Waking up at 4.30 am, I went right back to sleep, only coming back to my senses at 5 o'clock. At least I woke up. Opening my eyes was easy but trying to keep them open was and is a challenge. If I were to read Materials right now, I'd probably be knocked out within 3 seconds. And because of that, I'm blogging and soon will watch some drama or something.
earlychallenge me